Google Stadia and Games as a Streaming Service

I got my hands on a Google Stadia Premiere Edition this week. I had done some reading about the launch and about the project during its development. This article will focus on what I was expecting, how I felt testing the new way of playing games and what I think will happen next in the games industry.

Google Stadia is Googles project for entering the huge gaming market. Google Stadia lets players stream games from the Google Cloud. The player dont have to have fancy hardware locally for the games to run on. Some of Stadias USP:s are:

In order to get this, Google recommends that you have at least 10 Mbit/s but the optimal bandwidth is at least 35 Mbit/s.

At launch Google Stadia offers around 30 games in their store. You get two games for free with the Premier Edition (Destiny 2 and Samurai Showdown). 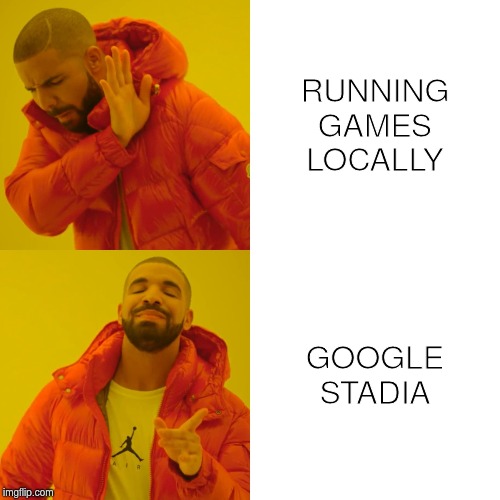 I really loved the concept of Stadia before I tested it. Taking away the need for buying and maintaining an expensive (and sometimes shaky) setup for running the latest games is a good idea. Everything that removes friction for getting stuff done is good in my book. What I was looking forward the most was the possibility to easily share contexts with fellow players (link into a specific state of the game), launch a game with low loading times and being able to play more or less everywhere you are independent on what hardware you currently have your hands on. This triggered me both from a gamers point-of-view but mostly from a die-hard internet tech person point-of-view. I was expecting some cool tech but was quite sure that it would have a lot of child diseases. I am actually quite stunned by how fast Google were able to go from "We are entering the gaming market" to "We have launched Stadia in x nr of regions". I guess they have thrown a billion or ten on this project.

I was not expecting much. For me Stadia is an expensive tech demo. On top of that, I expect Google to bail on all the products they launch, so for me, as it is with most of Googles stuff, I wanted to try it out from professional perspective, see how it worked technically and from a user perspective.

Setup was quite easy. Insert the Chromecast Ultra to a screen, I have tried it both wired and wireless, and both worked out well. Install the Stadia App (I used iOS) and connect the controller to the Chromecast using WiFi. I think Google has done a good job since launch of Chromecast to install and get up and running with new hardware, it is almost (and sometimes better) as good as Apple-easy to get started.

The first time I ran Stadia I did it at my office were I have a 4G router, so expectaions of getting lag was quite high. I started with the two free games, Destiny 2 and Samurai Showdown, and to my big surprise there were very little stuttering and lag. It felt like it got better the longer I played and I only got some drawing lags when I moved irrationally around in Destiny 2. In Samurai Showdown I noticed that the fps kept up but image quality was a bit lower from time to time. All in all I was pleased with the experience and very impressed by the technical solution, it felt a bit like I was trying out alien technology (wut, is this running on a computer somewhere else?)

What will happen next

The AAA-gaming industry relies on strong brands (IP:s) that they push out on quite frequent basis (yearly/bi-yearly). They rely on the user having hardware and decent connections for being able to actually enjoy and being able to actually download, update, install and play the game when they are released or new versions of the games gets pushed.

The last 10 years we have seen that more and more of the companies have moved from pushing a 100% (often ~80%) done game in a box to actually deliver games as a service. You buy the game and the studio treat the titles as Live Services where they push new content, new features, new game modes and characters on a schedule that makes it easier to keep players engaged in the game. With new tech, we have traditionally seen new software solutions that makes the games more enriched in size, looks and options. So, with this hard dependency on what hardware the big crowd has, the game studios can only ship stuff that actually is something that most of the players out there can play. With new iterations of hardware that rolls out to users in the world, we also see new inventions in tech that takes games forward. But the studios are dependant on how fast Sony, Microsoft, Nvidia, AMD and Intel can push new hardware out to the players.

Games as a Streaming Service changes quite a lot actually. Instead of waiting for a new set of hardware to saturate the world market, the players only need to wait for how long it takes to have the cloud solution they use to implement and update the servers they are using to stream the games. Think of it as instead of waiting for all to buy a new iPhone, we can do the hard lifting on the network, thus enabling studios to take advantage of new features faster than if the hardware is located at home of a player.

What it all boils down to is that: IF the experience of playing games streamed is as good as playing them when they run locally on our PC, PS4 or Xbox One then there will be almost no reason for games to be played the old way. The streaming solution that can iterate fast on new features, make sure that the user experience is at least as good as now for the majority of players and gather the titles that people want to play will be a winner in the long run. So, my thinking is that companies that today are good at making games will not be the future winners of the gaming market, the future winners are the companies that knows how to solve complex technical distribution of games over the wires. So what are the threats against services like Google Stadia? For Google I think it is:

So, next, we will see Stadia evolve with new features. We will probably see Sony and Microsoft put more focus on their offers for Games as a Streaming Service. The big question is what will happen to companies such as EA, Activision Blizzard and Ubisoft. Will they thrive from the new technology or will they have to adapt? I find it hard to believe that they can compete with distribution given the infrastructure that Google and Microsoft already has in place. I also find it hard to see that Sony can move in the same speed as Google and Microsoft in this area. My guess is that Amazon will join the party, because they are the only company that actually (except for Facebook) together with Google and Microsoft that can work at this scale in tech. Facebook is the big question. They have been doing some stuff in VR, and quite frankly I have a hard time believing they will be able to join this race without buying themselves into this market somehow.

It is a fantastic time for players. Faster distributions. Great user experiences independent on what hardware you are running. For the gaming industry? Wow, so much wow. We will probably see some redistribution of power and some interesting numbers the coming years in sales, income and on the stock market is my prediction.

If you wanna try Google Stadia out today, you can buy the Stadia Premiere Edition att Google Store.